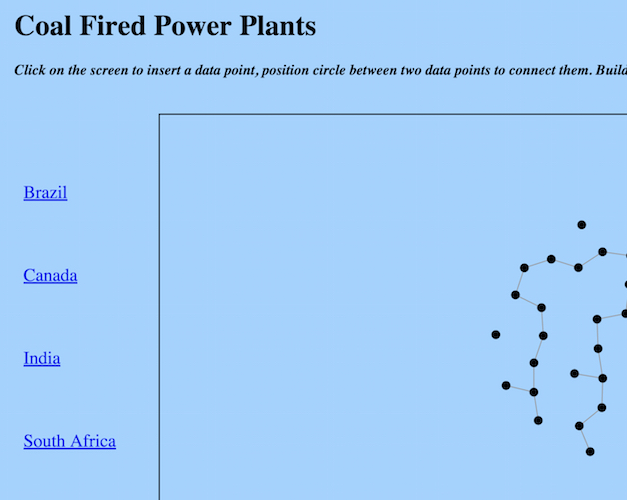 For this set of pages, I used Mike Bostock’s “Build Your Own Graph” created with D3.  Here is his description from the demo page:

“Click to add nodes! Nodes near the cursor will be linked to the new node.  D3’s force layout uses the Barnes–Hut approximation to compute repulsive charge forces between all nodes efficiently. Links are implemented as geometric constraints on top of position Verlet integration, offering greater stability. A virtual spring between each node and the center of the chart prevents nodes from drifting into space.”

The math problems were taken from a released FRQ that focused on the quantity of heat (from combustion of coal) required to generate a certain quantity of electricity, as well as an accounting of the resultant sulfur dioxide pollution and whether that emission exceeds EPA standards for coal-fired power plants.

There are severe consequences to our reliance (nay, addiction) to fossil fuels.  Sulfur oxides mix with water in the atmosphere to produce sulfuric acid which pollutes rainwater and also is dry deposited on surfaces.  Acidification of streams, rivers and oceans reduces biodiversity.  Acidification of soil causes mineral leaching, destruction of microflora and microfauna.  Acidification of leaf surfaces reduces photosynthesis.

Sulfur oxides are also harmful to human and wildlife respiratory systems.  From the EPA:

“Current scientific evidence links short-term exposures to SO2, ranging from 5 minutes to 24 hours, with an array of adverse respiratory effects including bronchoconstriction and increased asthma symptoms. . . Emissions that lead to high concentrations of SO2 generally also lead to the formation of other SOx. . . SOx can react with other compounds in the atmosphere to form small particles. These particles penetrate deeply into sensitive parts of the lungs and can cause or worsen respiratory disease, such as emphysema and bronchitis, and can aggravate existing heart disease, leading to increased hospital admissions and premature death.”

In APES, we focus much attention on the NAAQS for the criteria air pollutants, including SO2, how local air quality is communicated with the public, and how polluters can achieve these standards through conservation and technology.

I would be remiss to neglect the other toxic pollutants associated with the combustion of coal (I say associated lest we forget that coal must be mined from the Earth, which may involve underground mining, surface mining (Wyoming for example) or worst of all, mountain top removal mining (Appalachian mountains).  Acid mine drainage sullies water quality of streams and rivers, habitat is degraded or destroyed by mining operations, underground fires spew pollutants into the air, to name just a few insults).   Burning coal in antiquated power plants emits mercury, nitrogen oxides (one ingredient in the formation of ground level ozone), and particulate matter which find their way to the surface where they, along with sulfur oxides cause many environmental and human health problems.

Let’s push for a cleaner energy future without such a reliance on coal or petroleum.

Here is a link to a new version of this activity made with Angularjs.