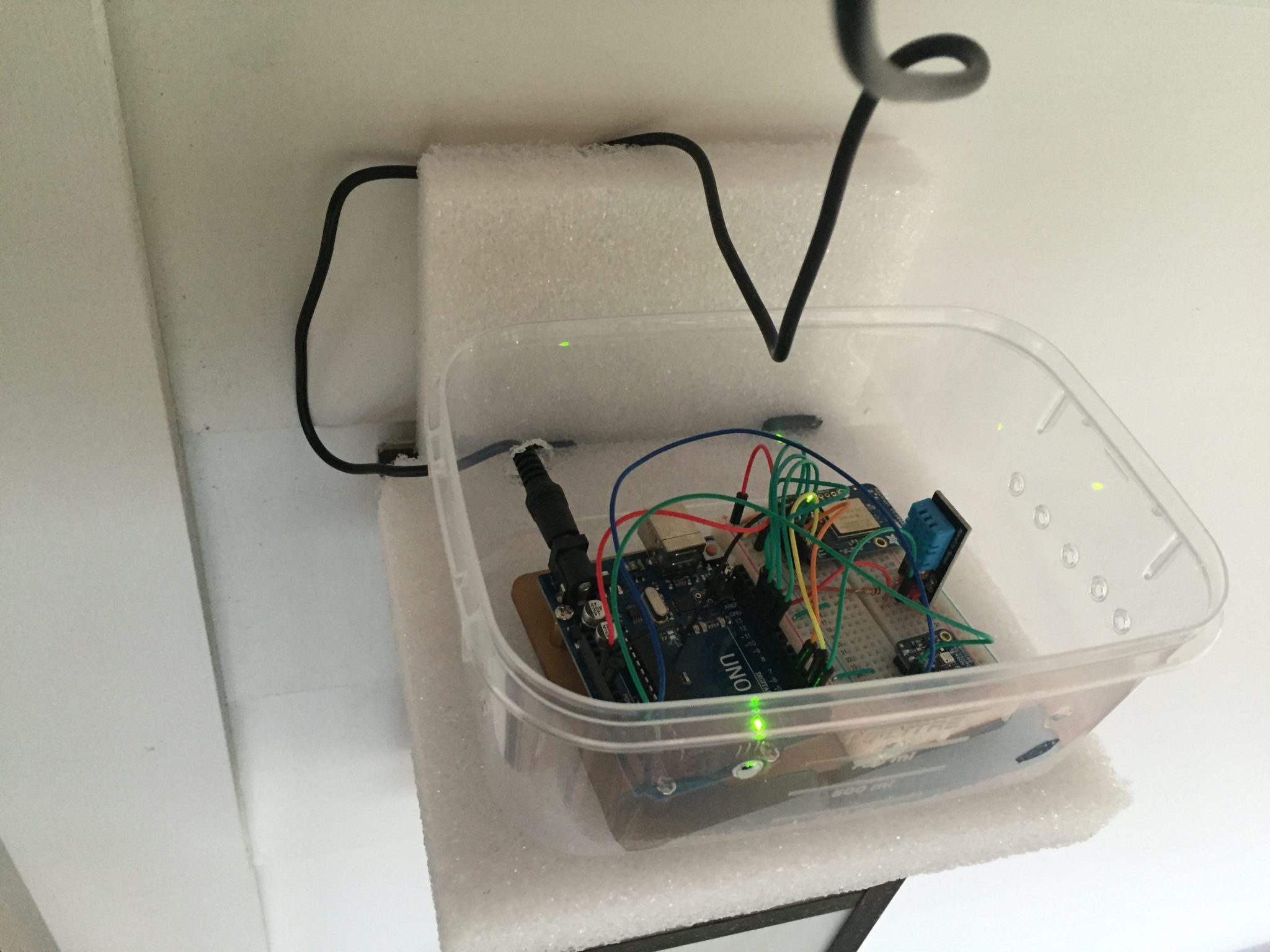 The weather station installed on top of light on my screen porch.  I insulated the plastic box from both the metal light and the house siding with styrofoam.  Everything is secured with velcro.  I burned multiple ventilation holes and a entrance for power into the plastic box. 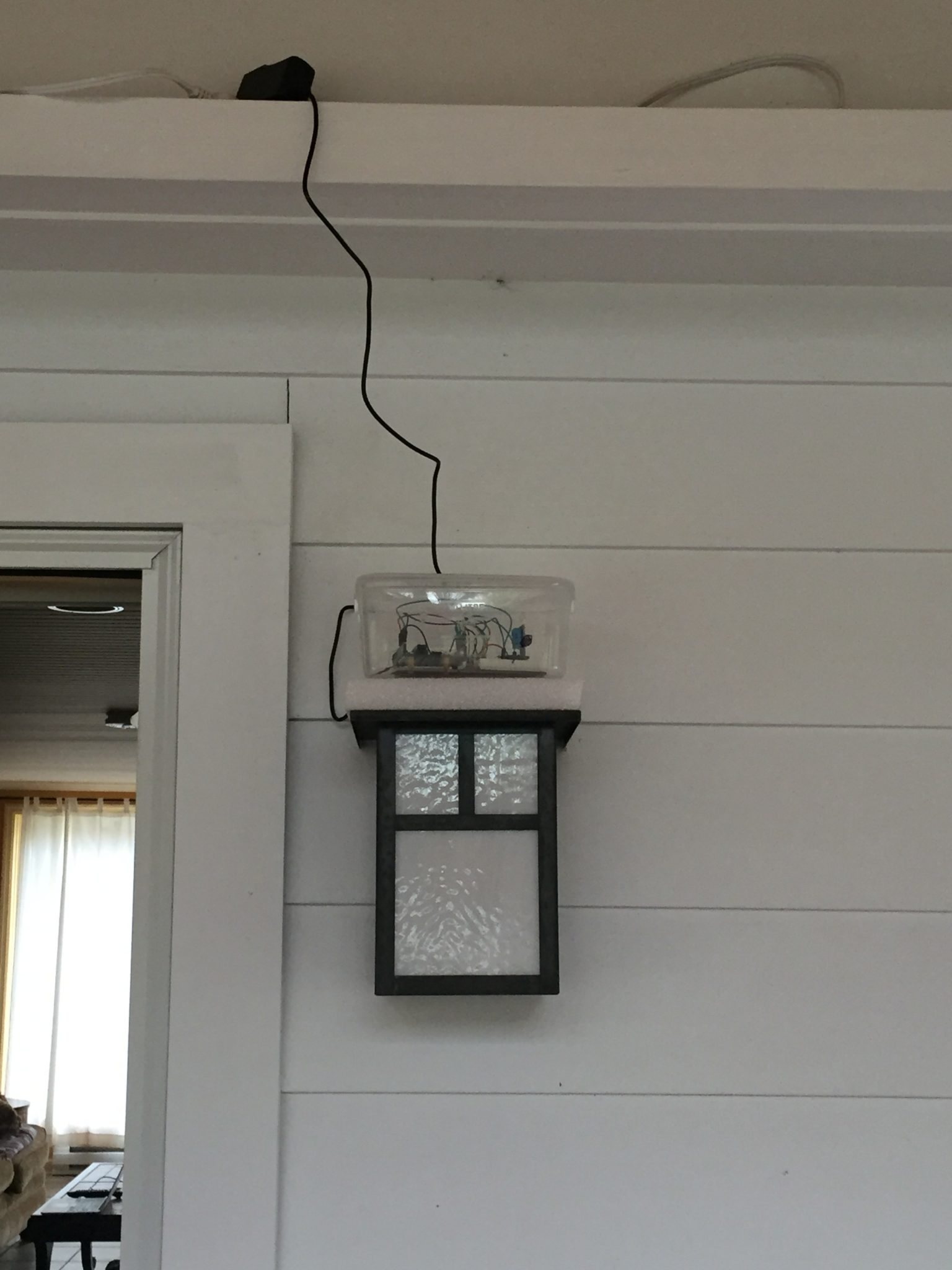 December 28:  I altered the code (here is link to GitHub repository) to upload float data from the pressure sensor (I left the temperature and humidity as integers, since those variables are usually reported as whole numbers, whereas air pressure is usually reported to  0.01 inHg (although I am recording air pressure of approx. 0.10 less than is being reported by NWS and Wunderground currently . . .)   I need to reduce the number of decimal places being sent to my ThingSpeak channel.

Also, it is clearly colder outside now than the DHT11 sensor is reporting  (NWS reports it is 43 F in Wayne, the unit is currently reporting 51 F, but it does not feel like 51 F out there) . . . I will watch the reporting for the next day and consider switching to temp from the BMP180 (it is supposed to be more accurate).  Could it be that the unit generates enough heat to warm the interior of the box by 10 F relative to the ambient air temp??  I need to find a little thermometer!!!

So . . .  some minor issues to attend to, but I am happy with the basic set up!!  The changes I made to the code to fire up the two sensors, connect to wifi, collect data, update my ThingSpeak channel, then disconnect from wifi for 5 minutes seems to have solved my earlier issue with maintaining a permanent connection to my home wifi via the CC3000.  Other people had reported a similar problem.

I am awaiting arrival of a Naturebytes wildlife cam kit (raspberry pi) — one goal will to snap time/photos of visitors to my bird feeder and look for any correlation between time/number of visits and the weather data I am collecting.

January 2:  I replaced the dht11 with a more accurate dht22 sensor.  I also used the NetSpot app to learn that my wifi signal is only 20% at the location on the screen porch!  I have just moved the weather station to the front entry — there is power and a bit of cover there.  NetSpot says that the signal is over 60% at that location.  The router is located inside only about 12 feet from that location.  If the data sends for a couple days in this location, I will set up a more permanent home for the weather station by the front door.

January 3:  Seems that the wifi signal is strong enough just outside the front door — but of course, at that location the exterior temperature is influenced by the thermal loss from the house (particularly since this darn house has so little insulation).  Next goals — move the unit out from house (hoping the wifi signal will be strong enough directly out from the office window).  Also, learn how to read data from Thingspeak channel and display in a Highchart line graph on this website.  Here is my first attempt.   Here is a much more interesting and interactive second attempt.